What types of classes do you offer at Legendary Athletics?

We offer a variety of classes and programs here at Legendary Athletics. We offer recreational tumbling, cheerleading and dance classes for ages 3 – 18. We also have competitive cheer and dance programs.

Where are you located?

What are your hours?

Our general office hours are

When are my monthly tuition/fees due?

How can I pay for my monthly tuition/fees?

We require that all customers sign up for ACH withdrawals, which is direct withdrawal from a checking or savings account,. This will ensure your account never receives a late fee as we take care of running the ACH payment on the 1st of each month. If you would like to pay by any other means, you may do so if payment is made before the 1st of the month, however an ACH must be on file.

Do you offer Open Gym, Parent’s Night Out (PNO) or Birthday Parties?

What is the cost for a recreational tumbling or cheerleading class at Legendary Athletics?

The monthly tuition for a recreational tumbling, cheerleading class, or dance is $81 per month. You will also have your annual registration fee to pay at the time that you join which is prorated based on when you join. The Annual Registration fee is $50 for an individual or $75 for a family (2 or more children). * Team athletes pay reduced class tuition of 20% off.

When does a new session of classes start?

Our recreational classes are ongoing month to month. Your child can start at any time throughout the month and the tuition will be prorated based on when you start.

What if my child has no experience? Will my child be behind the other kids already in the class?

Dance, Tumbling or Cheerleading experience is not necessary. We offer Level 1-5 tumbling classes so our Level 1 classes are specifically designed for children with little to no experience as well as those looking to perfect the basics prior to moving on to more advanced skills. Our coaches are very experienced to welcome a new child into a class and have the ability to work with various levels within each class.

What if I need to drop a recreational class?

What should my child wear to a recreational tumbling or cheerleading class?

Your child should wear comfortable shorts & shirt. Bloomers and sports bra are recommended for older athletes. Socks & clean sneakers are required. Please make sure your child’s hair is neatly out of their face so it doesn’t cause distraction or prevent them from completing a skill.

Can my child come to more than one recreational class each week?

Absolutely! The cost would be $81 for the first class and then you receive a 10% discount on the monthly tuition for each additional class.

Do you offer a sibling discount?

Yes! The cost would be $81 for the first child and then you would receive $10 off on the monthly tuition for each sibling.

Do you offer a trial class for my child to participate in class prior to signing them up?

Yes, we always offer a trial class so that your child can participate in the class they are interested in and we have no doubt they will love it and want to sign up.

Do you offer make ups if my child should need to miss a class?

Yes, please contact the front desk for days and times.

If the gym is closed for a Holiday or break do we get a make up class or a discount on tuition?

We offer make ups for days the gym is closed. All make up classes must be scheduled through the front desk. 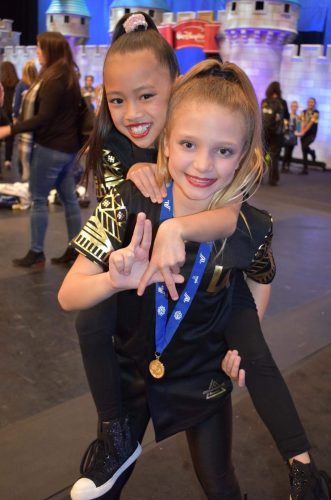 What is All Star Cheerleading or Dance?

All-Star cheerleading and dance are competitive sports that involve boys and girls performing a 2 minute 30 second routine composed of a variety of components. For cheerleading, those components can include tumbling, stunting, pyramids, dance and cheer segments. For dance, those components can include tricks and various forms of dance. This routine is performed and scored against other competitive teams at various regional and national competitions.  Being part of All-Star Cheer and Dance takes a lot of dedication and commitment. The season begins with Tryouts the beginning of May. Teams will typically practice 1-3 days per week for 1.5-2.5 hours per day. The competition season typically begins early December and runs through the end of April. Most teams compete 5-7 times per season. Most of our competitions are throughout Central Florida (Daytona, Orlando and Tampa). However, some teams may travel out of state for 1-2 competitions each season.

What tumbling skills make up each cheer level?

Please see the form titled Tumbling Skills by Level located under our forms section on our website.

How long does the All-star season run?

The full All-star season runs May – April. Tryouts are in May and practices also begin in May. Competitions will start in November or December and will run through April. For our half season All-star program (All-star Prep) the season will run December – April. Tryouts are in DNovember. Practices will begin in January and they will compete in 2 competitions in March/April.

What if my child doesn’t have any tumbling experience?

We offer teams for all ages 3-18 and Level 1-5 cheer teams so our level 1 teams would be a great place to start to learn tumbling and cheerleading. No tumbling or cheerleading experience is necessary. We would encourage taking an additional tumbling class or private lessons to help your child progress a little quicker through their tumbling skills.
Tumbling/tricks are highly encouraged but not required at this time for our non-elite level dance teams. Tumbling/tricks are required for our Elite level dance teams.

Can my child be on both an All-star Cheer and Dance team?

Yes, absolutely! We have several athletes that are on both an All-star Cheer & Dance team. The only instance that we do not allow an athlete to compete on both a cheer and dance team are for Worlds. Per USASF rules, an athlete cannot compete at Worlds for both Cheer & Dance. Other than the previous instance, as long as the practice schedule works we love having athletes in both Cheer and Dance. Athletes that cross-over from Cheer to Dance will receive a 20% discount on the tuition portion of your second team. You will be responsible for all uniform and travel fees associated with being on both a Cheer and Dance team.

What is required (or recommended) practice wear for Cheer?

Athletes will receive a set of practice wear and their team coach will instruct them as to when they should wear them. For their other practices, we recommend cheer athletes attend practices in comfortable clothes including shorts with bloomers on underneath and comfortable t-shirt or tank (we prefer that all athletes wear sports bras to ensure nothing is exposed). We do require all cheer athletes to wear socks & cheer shoes to practice and hair to be pulled up out of their face.

What is required (or recommended) practice wear for Hip Hop?

There is not required practice wear for our dance teams. We recommend hip hop athletes attend practices in clothes (shorts or sweatpants and shirt) that will allow them to comfortably perform intricate foot work and dance tricks without interference. Once they begin practicing their routine on the Marley dance floor, hip hop sneakers will be required during practices.

Do you offer sibling or multi-team discounts to team athletes?

Yes, we provide a 20% discount off the tuition portion of your monthly fees for siblings or a second team.

Will my child move up a level every year?

It is not guaranteed that your child will move up a level every year. We encourage every child to progress at their own rate. Participation in tumbling classes or private lessons is encouraged as you will likely see your child develop skills at a faster rate and with proper technique.

Will you work next level skills during team practices?

The summer months (May-July) are focused primarily on building skills. This can be either building/fine tuning skills needed for your child’s current team level as well as working skills for the next level once the current level of skills are mastered. Once choreography begins (August/September) the focus of practices will shift to preparing the routine for competition however athletes will continue to work on building skills.

Why does my child need private lessons/additional classes, isn’t that covered during team time?

Private Lessons or additional classes are not required of our team athletes. Athletes will work on tumbling skills during team practices however the more opportunity an athlete has to work on skills the faster they will learn new skills.

What is your attendance policy for athletes on an All-star team?

What style Cheer shoes are needed for practice? Competition?

*New this year* All Cheer athletes will be required to compete in their new Varsity Shoes. For practices, we just require an all white cheer shoe.

How should my child’s hair be styled for cheer practice? Competition?

How should my child’s hair be styled for dance practice? Competition?

There is not a specific style for practices. Your coaches will provide specific directions for hair styles prior to each competition. The hair style can change from competition to competition if dance athletes also have to compete on a cheer team that same day or if due to the schedule we have dance cross over athletes that won’t have time to change hair styles between warm-ups for each team.

Who can I contact if I do not know how to do hair or apply make up?

Please contact your Team Mom should you have issues with how to apply the make-up or style your child’s hair.

Who should I contact on competition day in the event of an emergency or tardy?

Is it OK to leave during the competition if there is a break until the next Legendary team competes?

What is the average cost per spectator at competitions?

Who do I talk to if I have an issue?

What is the best way to communicate with my coach?

Can you join a team later into the season?

There is a possibility that your athlete can join a team after the season has begun. This will depend on available spots on our teams as well as your athlete’s skills.

Are scholarships or fundraising options available to help with the monthly tuition and fees for being part of a competitive program?

We do not offer scholarships however several of our athletes are able to obtain sponsorships to put towards their monthly expenses for being in a competitive program. At this time, fundraisers are handled by our Team Moms on a team by team basis. So, this may be an option should your team choose to organize fundraisers. We do not offer fundraiser opportunities on a gym-wide basis.

Does everyone make a team?

It is our goal to place every athlete on a team. We offer various levels in both our cheer and dance programs and will do our best to place each athlete on an age and level appropriate team.